… We hurriedly made our way towards the platforms to catch the Narita Express Train to Tokyo. The ride from the airport to Tokyo station was an hour long… the first half of which, we spent quickly looking up how we can get to our hotel in Jimbocho using the JR train lines.

In hindsight, I now realize that would have been way easier… but I was stubborn that day, feeling very determined to try to use our JR passes as much as possible even if it meant we didn’t take the shortest route.

The best option we found was to take the Chuo line (rapid service) from Tokyo Station to Ochanomizu station then walk 14 minutes to our hotel. 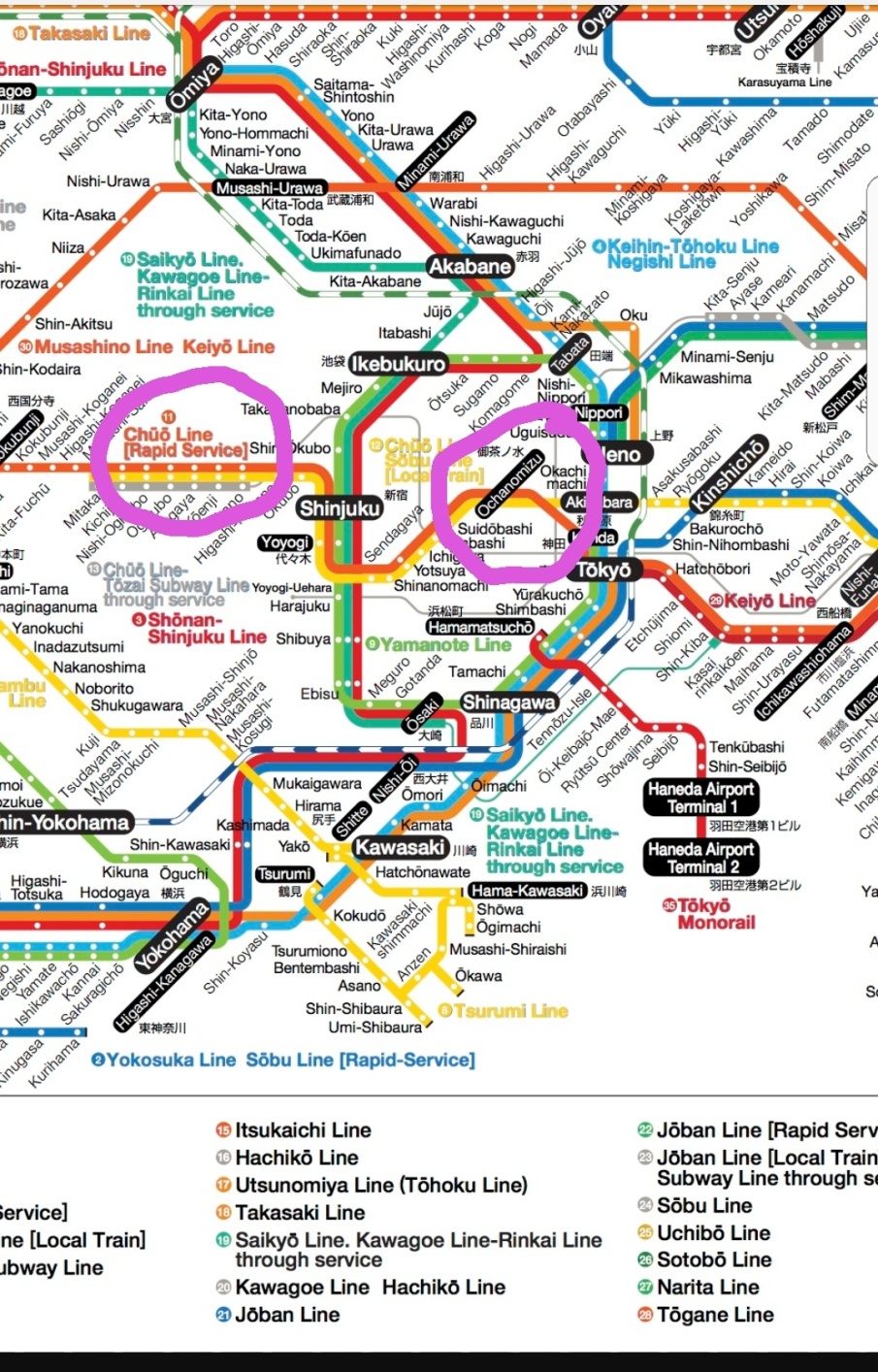 The second half of the trip was spent mostly gazing out the window.

The nearer we got to Tokyo, the brighter the view became as more and more city lights came into view — such a sharp contrast to night time in New Zealand…so it was a pleasant sight to see. Also, it was making me feel more excited for the next two weeks!

When we arrived at Tokyo station, it was initially a bit overwhelming. So. Many. People. I was expecting Tokyo to be crowded… but actually seeing it first hand, that was an experience in itself.

However, the Japanese are well known for being able to keep things in order… so it wasn’t totally chaotic. People always lined up to get into the trains and there were signs to keep left or right so that those who were in a hurry can easily pass through when going up and down the stairs and escalators.

Walking wasn’t such a bad idea. We at least got to see the area a little bit.

It was our first time to walk around Tokyo so we found it very interesting. There were tall buildings all around and huge billboards scattered everywhere. We also passed by a lot of restaurants.

One we remember in particular because it caught our eye as we about took a crosswalk. It didn’t look fancy or anything. It actually looked pretty plain… but we could see lots of people inside (mostly in business attire) having a really good time eating and drinking beer.

Jan and I wondered whether it was a cheap place to eat as it looked like most of the people in there were employees having dinner and drinks after work. We thought about going back after we dropped off our luggage at the hotel but unfortunately, we never really got to back.

There were so many Family Mart konbinis (convenience stores) as well! Not that that’s very interesting… haha! But we just found it a bit amusing as we felt like we saw one every few minutes while walking. Hehe!

It was also nice to know there were many of them in the area as they’re quite handy for buying water and food on the go (onigiri!) and for withdrawing money (in yen) from their ATMs using a foreign credit card.

We also passed by one street that, for the first 24 hours, I  wrongfully thought was Takeshita Dori (yes, the one in Harajuku. No, I don’t know why I would think that when we were clearly in a different district). I was even cheerfully telling Jan about it.

Of course, it wasn’t and I was completely off. Haha! I could no longer remember the name. All I remember is that it was a bit of a long street with pink street lamps and it had lots of restaurants and shops.

We arrived at our hotel, safe and sound.

We checked in and brought our luggage up to our room and then ended up having dinner at the hotel’s 24hour cafe as we were too tired to head out again. We decided it was better to hit the sack early so we could have a good rest and be ready to explore Tokyo bright and early the next day!